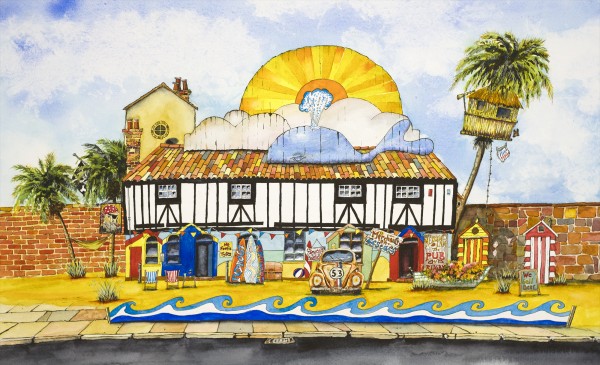 Merchant's-on-Sea is one of a number of watercolours of local pubs in Rugby. The Merchant's Inn is a well established popular watering hole for many of the local punters and it has a reputation for a crowd-pleasing range of ales. It's clientele are inclined towards the oval rather than round ball which isn't a bad thing. The Merchant's is well known for its beer festivals and by way of promoting these it has a reputation for changing its facade and interior decor to match the theme of each festival from cow or zebra hide to dangling apples from the rafters and bales of hay around the bar.
Talking of Bales of Hay this is what my Dude Brother Pedro calls the Merchants. In a cruel trick some moons ago at the annual July posse get together at my gaff around the time of the Rugger Fezzie de Couture we happened to be in the Merch and Pedro was blown away by the bales of hay round the bar and thought that this was the coolest thing ever. He thought that this pub always looked like this but sadly not, it was just for the festival. In memory of this climactic and anticlimactic event we now fondly refer to the Merch as the Bale of Hay every time we raise a glass there.
Merchant's-on-Sea takes its inspiration from the seaside theme that the Merchant's adopted for a previous festival when the lower half of the building was painted with beach huts and sea and sand. This inspired me to push it to the next level with a hippie, surfer and marooned pirate take. It's given me lots of ideas to create more fantastical pub themes that portray the character and individuality of each pub. I really love this one! It represents the start of a new fantastical pub series.
More importantly Pedro loves this one too, and why wouldn't he, after all he does get a shout out on the surfboard.

Printed on A3 sized paper, the image is centered to leave an edge to help with mounting. Frame is not included. The print will be rolled and sent in a cardboard tube.