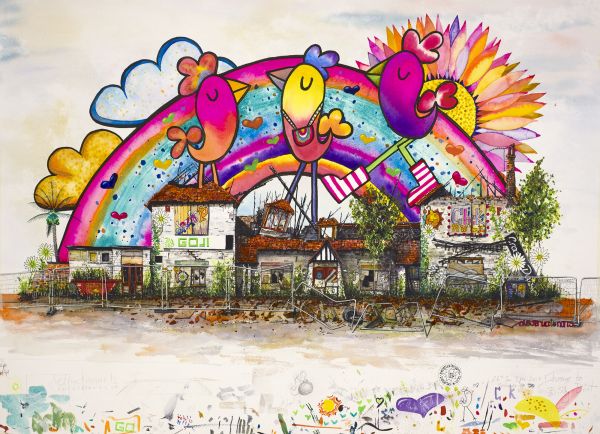 Crazy Daisy's: A Femage to BintyBint is just what it says. Inspired by BintyBint, arguably the coolest current street artist of international repute, this painting took quite a while to complete, probably about eight weeks on and off. Crazy Daisy's nightclub by all accounts was one of the 'in' places to party in the 90s on the outskirts of Coventry in the middle of nowhere just off the A45 en route to Rugby. Since doing this painting many people have come up to me and shared their stories about how Crazy Daisy's shaped their formative years. It was open for about 8 years but eventually it changed hands in 1998 and became the Goji Chinese Restaurant. The Goji eventually closed and after a period of dereliction, squatters and thieves ransacked the place and it got torched in May 2011. Such a sad end to a place that held a special place in people's hearts and memories.
In May 2018, on my way to my watercolour class in Wolston, I took a few snaps of the place intent on finding out more about its history and thinking I might create something interesting from its twisted blackened timbers and mock Tudor styling. It was surrounded by broken Heras security fencing across the impressive length of its symmetrical layout. It was in a very sorry state, slates had been dropping from its rooves and were smashed all over the overgrown garden and driveway. The dormer style upper floor windows were half falling out of the roof. It was impressive dereliction personified and yet it had a real esoteric feel to it.
I was somewhat perplexed by the fun chickens sprayed on the outside and was determined to find out more about them and their creator, BintyBint. It turns out that Binty is a street artist of international repute based in Daventry. She is most well known for her famous colourful snooty chickens which adorn many a wheelie bin and wall across Northamptonshire and Warwickshire but her work can be found all over the world including the US and Dubai. I thought it entirely fitting that Binty's work should form the centrepiece of my painting restoring the fun and colour to this sad, derelict place so that its vibrancy and liveliness could continue to live on and be remembered for its positive vibes. This work is one that I really love.

Printed on A3 sized paper, the image is centered to leave an edge to help with mounting. Frame is not included. The print will be rolled and sent in a cardboard tube.